A review of Judaism Straight up by Moshe Koppel

Several years ago, a blog called Judaism Without Apologies began to circulate on social media. The blog began by juxtaposing two Jewish characters’ lives and ideals: Shimen, a Gerer Hasid of sorts and Holocaust survivor living on the Upper West Side of Manhattan, and Heidi, a cosmopolitan Princeton graduate who thinks of herself as a citizen of the world. 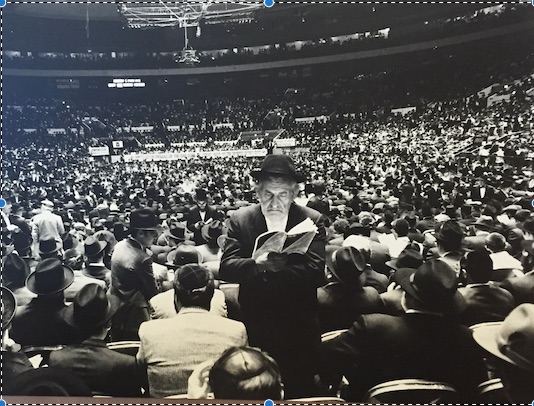 A photograph by George Kalinsky of my own Polish Holocaust survivor grandfather at the Siyum HaShas in 1990. I imagine Shimen having a similar intense, independent-minded look.

The series was narrated by the American Israeli computer scientist Moshe Koppel, who had attended Shimen’s Gerer shtiebel in his youth. After obtaining a PhD in mathematics, Koppel spent a year at Prince- ton’s Institute for Advanced Study, where he met the original Heidi, the first of many he would encounter in the years to come. Koppel’s blog may have been rooted in comic sociology, but it quickly morphed into a serious discussion of moral philosophy, game theory, cultural anthropology, the nature of language, and ultimately an argument about the future of Judaism itself. Despite its rather niche appeal, the blog’s unique fusion of a no-holds-barred attitude with serious erudition attracted some diehard fans. Koppel has just published an expanded book-length version, which presents a cleaned-up and even more compelling defense of the old-fashioned Judaism Koppel imbibed in the shtiebel.

Shimen, a real-life acquaintance of Koppel (Heidi is a composite), is at the heart of the book. He survived the Lodz Ghetto and Auschwitz, but his wife and two precious children did not. After the war, Shimen picked up a handgun and collected Jewish children who had been hidden by Polish families and returned them to their communities. Elie Wiesel, who prayed in Shimen’s Gerer shtiebel from time to time, once told a story about celebrating Rosh Hashanah in Auschwitz without wine. An inmate announced, “we’ll take out tin cups and fill them with tears. And that is how we’ll make our kiddush . . . heard before God.” That, apparently, was Shimen. Koppel writes of Polish Hasidic Holocaust survivors like him:

[They] were intense, they were angry, they could be funny in a biting sort of way. . . . But one thing they had no patience for was high-minded pieties. They despised pomposity and self-righteousness. Their devotion to Yiddishkeit, old-fashioned Judaism, as a way of life, and to the Jews as a people, were as natural and instinctive as drawing breath.

To read the full review see the wonderful new issue of Jewish Review of Books.